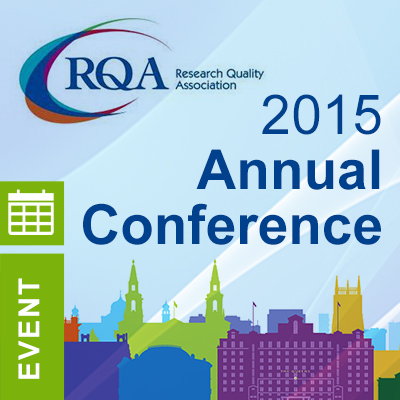 ADAMAS' Experience at the RQA Annual Conference in Leeds

This year’s RQA Annual Conference, held in Leeds was attended by over 300 delegates and many attendees visited the ADAMAS stand in the exhibition hall. The Poster by Dr Annie Chen, ADAMAS Consultant “Conducting remote vendor audits” proved extremely popular and repeat print runs were required to keep pace with demand.
The conference programme was a delightful and eclectic mix of informative, thought-provoking and sweeping presentations, statements and images which combined made this a most enjoyable conference. A few colourful examples are summarised below:
• Jane Wood presented on behalf of the work completed by TransCelerate, titled ‘Smart Quality: A clinical quality management system (QMS)’ where she discussed the lack of existing guidance available for clinical QMS specifically. Therefore TransCelerate have generated a concept paper which describes the conceptual framework for a clinical QMS using knowledge management and issues management as tools.
• Joanne North (GSK) explained ‘Smart Quality: Enhancing our ability to find signals in audit data and be more predictive’ whereby she described how to capture key performance indicators and meaningful metrics to identify areas of risk, signals and trends using available technology.
• Andrew Waddell of TMQA presented ‘The role of a Quality Assurance auditor in today’s world’ through which he discussed the futuristic potential use of voice recording during inspections to capture notes which fed into electronically generated audit reports.
• Vanessa Grant of Envigo (formerly HLS) presented ‘A fresh approach to SOPs’. Vanessa described her three year project, evolving 1700 SOPs from the typewriter age – familiar black type, white paper (green or yellow for the bold), generic format and content – to the computer age by exploiting versatility of font, colour and layout including hyperlinks to video clips and instruction. Envigo have progressed from using ambiguous ‘should’ and commanding ‘will’/‘must’ to starting instructional sentences with active verbs. The MHRA have indicated their support.
• Anabela Marcal (EMA) provided a status update on ICH E6 R2 with Step 3 due June 2016 with Step 4 by the end of 2016. Pertinent questions included when it would be adopted in the ICH region, with response that there was no information as yet. Also mentioned was the EU Clinical Trials (CT) Regulation, now estimated effective by the end of 2017 following the publication of the much needed detailed guidance on risk based approach to CT early next year.
• A witty session ‘Auditing (PV) computer systems from the perspective if a non-CSQA auditor’ given by Manjit Virdee, ex-MHRA PV inspector, kept our feet firmly on the ground through provision of a reminder to audit from the top down, i.e. by assessing the processes (SOPs) first to verify compliance with regulation, followed by system hardware and software to the validation package itself for provision of examples of noncompliance. He left us with the marvellous image that a successful jockey does not initially need to be a horse (encouraging to the less confident auditors!).
• Christine Gray (MHRA) described ‘Data Integrity’ which mirrored the focus of the 2015 MHRA Good Laboratory Practice (GLP) Symposium and also was a key discussion in the Good Clinical Practice (GCP) clinic at the RQA conference. Areas she highlighted included the risk awareness spectrum and differences in execution of data integrity ALCOA principals for paper and electronic systems.
• Key note speaker Ben Goldacre (‘Bad Trial’) pulled the largest crowd; entertaining through rapid monologue punctuated with jolting ‘nexts’. Methods in which trial outcome could be biased to provide desired outcome by those driven by greed were described. No mention was made however to the systems and responsibilities (including auditors) established to prevent such occurrence, or comment on the improved transparency anticipated in the new CT Regulation. A lasting image was made of medics self-training on current drug safety through reading un-checked articles published in international journals whilst sitting on the toilet having a poo. Thanks, Ben.
And if that was not enough, the Conference dinner and ball was great fun with 1920s dress code and tables accordingly decorated with centre pieces of feathers, masks and various accessories to ensure a vibrant gallery of photographs to provide a lasting image of the conference. I had the added value of sharing a table with prominent members of the RQA Computing Committee (as well as Rebecca Noss, the new RQA Regional Forum Chair in America, and her husband) who gamely donned accessories to be photographed. I can’t wait to see the photos!
Lastly, we were pleased to announce that the ADAMAS business card prize draw for the Kindle Paper White was won by Shaun Hastings from Servier Research and Development Ltd.
Many thanks to the ADAMAS Business Development Team, with particular mention to Marianne Lambert, for facilitating the successful ADAMAS attendance at this prominent event.